The Meadow That CBEC Built

CBEC is joining the fight in bringing back the bees through a partnership with U.S. Fish and Wildlife to manage a natural pollinator meadow. The 1.3 acres of uplands along Discovery Lane has been designated to help restore natural pollinator habitat and act as a Best Management Practice to underline the importance of habitat restoration. The design of the meadow is to promote a biodiverse habitat that would support native pollinator species in Maryland. CBEC, along with U.S. Fish and Wildlife, will be enacting a Managed Pollinator Protection Plan (MP3) to manage the pollinator meadow. 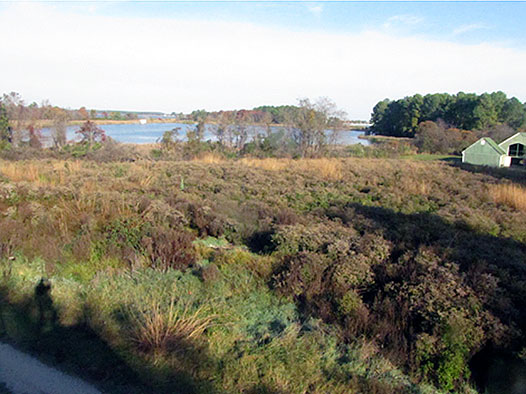 Above shows an aerial view overlooking the meadow from Discovery Lane. This view allows CBEC to have a better understanding on growth patterns and species density present in the meadow. Along the right side of the photo, wildlife trails can be seen heading through the meadow. Photo taken by Greg Usilton.

Removal of vegetation from the area started 5 years ago, consisting of 2 initial cuts of woody vegetation to open the area for restoration efforts to begin in 2017. Final preparations to seed by CBEC staff and volunteers started with removal of all vegetation from the project site. This year will start a 5-year management plan partnered with U.S. Fish and Wildlife.

To ensure the success of the meadow, the ground was raked and weeded to create undisturbed seed to soil contact, important in overall development. In practice of sustainability, the meadow was strategically planted to follow rain in the forecast to allow the meadow to be watered by natural weather events, conserving the overall usage of water in development. The meadow was officially seeded in June in time for the summer months, with three smaller seeding events to help fill in weak spots throughout the project site.

Seed for the meadow was secured by U.S. Fish and Wildlife through Ernst Seeds, containing a northeast annual and perennial wildflower mixture made up of 34 different species. The dominant percentages in the mixture include: Blue Flax, Sulphur Cosmos, Rocket Larkspur, Cornflower, Bigleaf Lupine, Butterfly Milkweed, Bachelor’s Button Tail, Blackeyed Susan, Oxeye Sunflower, Wallflower, and Oxeye Daisy, among many others, that add to the collection of the natural seed bank. As the project moves from year to year, observers will start to notice more and more of these “flowering plants” growing up through the meadow.

To determine the native species in the natural seed bank, CBEC’s own master naturalist participants, Maureen Fine and Karen Larson, took on the meadow and identified different natural species. The meadow’s population was dense with the grass species Late flowering Boneset (E. serotinum) and Eupatorium hyssopifolium (Hyssop-Leaved Boneset) which are great for Maryland pollinators. Along the outside of the meadow, another natural grass has taken hold defining the perimeter of the meadow, Little Bluestem (Schizachryium scoparium). But this is only a few of the 45 species of flora that were identified to be present in the meadow after year one.

Dense natural grasses provide habitat for more than just Maryland pollinator species. These dense grasses create habitat and places to feed for: mammals, birds, reptiles, and, amphibians. All throughout and around the pollinator meadow are signs of mammals, from groundhogs to deer, that leave their tracks. The meadow has now become a living highway for these mammals as they feed along the meadow. Although birds frequent the meadow, there is still abundant food sources elsewhere for them to feed. As the year comes to a close, visitors will observe the meadow become a feeding ground for many species of songbirds.

The first year management plan under U.S. Fish and Wildlife allows for early successional grasses to dominate the growth of the meadow, establishing natural pollinator habitat. The meadow is not to be mowed during year one, but spot sprayed for invasive and woody species to ensure secondary succession does not take over the meadow. This year, U.S. Fish and Wildlife representative, Bill Shultz, conducted three chemical spot treatments for both invasives and woody species, protecting the longevity of the meadow project. During joint trips through the meadow eradicating invasives, Canadian Thistle was determined to be the most abundant of invasive species. Although Thistle was the majority of the problem, a patch of Phragmites was also identified and eliminated. 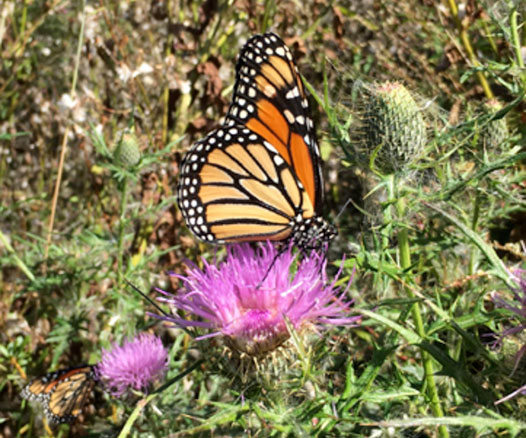 Canadian Thistle was determined to be the most abundant invasive species observed in the developing meadow. Photo taken by Janet Gingold.

Although we can celebrate a successful first year, there is much more to be done to ensure a robust flowering meadow. The meadow will receive a second round of seeding in the second year to help fill in weak spots that saw no growth during the first year. After the meadow has been seeded a second time, it will get cut to six inches and act as straw to cover and protect seeds as they grow.

The successful first year of growth will allow conservation efforts to take place starting the second year. U.S. Fish and Wildlife and CBEC staff and volunteers will be implementing population research-based studies to distinguish the success of CBEC’s pollinator meadow. These studies will include: the building of a monarch butterfly weigh station and tagging events, along with bee population studies to determine which species utilize the meadow.

Get a LIFE!
Scroll to top