Tundra Swans Whistle While They Work

No, they’re not snow geese. They’re bigger and have a longer neck. That flock of large white birds you may see this time of year could be our native Tundra swan, which likes to visit Chesapeake Bay area farm fields and waterways during its migration from the Arctic tundra. Tundra swans, also known as whistling swans, migrate to the bay region in late October and early November and head back to the tundra in early spring to breed.

A Tundra swan’s call is high-pitched and similar to a snow goose. The explorers Meriwether Lewis and William Clark wrote the first known description of these swans during their expedition to the west, where the birds’ whistle-like calls prompted Lewis to call them the “whistling swans.”

Tundra swans are North America’s most numerous swan species, with two populations recognized: Eastern and Western. The Eastern population winters on the Atlantic Coast in our bay region and in Virginia and North Carolina. In contrast, the Western population winters on the Pacific Slope, mainly in California. Tundras breed throughout the Arctic and sub-Arctic from Bristol Bay, Alaska, north along the Bering Sea coast, the Arctic Ocean east to Baffin Island, and south to the northwest coast of Quebec. Surveys in 2015 by the U.S. Fish and Wildlife Service estimate about 117,100 Tundra swans in our eastern population and about 56,300 in the west. 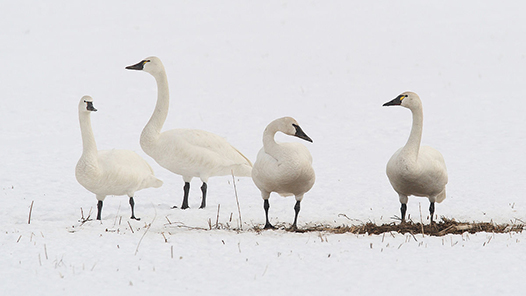 Tundras eat seeds and bay grasses such as redhead grass, widgeon grass, sago pondweed, and wild celery. They feed by submerging their head and neck underwater to reach food, sometimes tipping their tail up in the air. They may also eat invertebrates such as mollusks, amphipods, and polycheate worms on tidal mudflats. On land, they will eat winter wheat and other grains in farm fields.

Tundra swans have virtually an all-white body with a black bill, often with a yellow spot in front of the eye, and black lower legs and feet. Males weigh between 9.5 to 21 pounds, females up to 14 pounds, and they measure between 47 to 59 inches in length with a wingspan of more than 5 feet. Based on banding records, the oldest known Tundra was a female of at least 23 years, 7 months.

Tundra swan nests are usually built on points or hummocks close to a pond or lake. On average, females lay three to five eggs and sit on them until they hatch, usually 32 days. Males don’t help with incubation, but they stay close to the nest and guard against predators. Wolves, people, and bears, however, are too big to fight, and most incubating swans leave their nests when large predators enter the scene. By leaving quickly, they may make their nest harder to find.

Below are a few links to stories about the tundra swan: