Birds identified on Marshy Creek in the Fall (August through November)

You are here: Home1 / Birds identified on Marshy Creek in the Fall (August through November)

Marshy Creek is a relatively shallow body of water where visitors to CBEC can kayak April through October.  Beginning in late October to early November a number of water fowl use Marshy Creek as they migrate South. Some birds and water fowl that might be identified include ducks, geese, loons, eagles, osprey, herons and egrets. 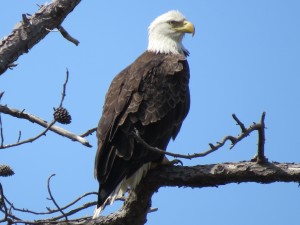 Bald Eagle, Haliaeetus leucocephalus, Adult. Can be seen year round though sometimes may travel to Canada in the summer. Call is a rather weak, flat, chirping, whistle.  Likes to eat fish, waterfowl, small mammals, either captured or scavenged. It is 31″ in length, a wingspan of 80″ (6 ft. 8 “) and weighs 152 oz. (9.5 lbs.)

Northern Pintail, Anas acuta, Adult non-breeding male, mainly seen in the winter.  Feeds mainly on seeds taken from the water and while grazing. Voice of the female is a quiet quack and the male gives a high, wiry drawn-out, zoeeeeeeaa and a short, mellow whistle toop, or proddud.  It is 21″ in length, a wingspan of 34″ and weighs 28.8 0z. (1.8 lbs.) 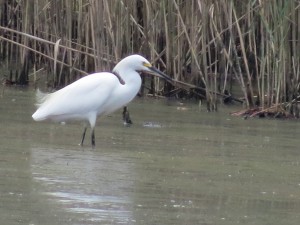 Great Egret, Ardea alba, can be seen year round. forages in shallow water or in grassy marshes in search of fish or other aquatic prey.  Voice is a very deep, low, gravelly kroow, grating unmusical karrrr, and other low croaks.  It is 39″ in length, a 51″ wingspan, and weighs 30.4 oz. (1.9 lbs.) 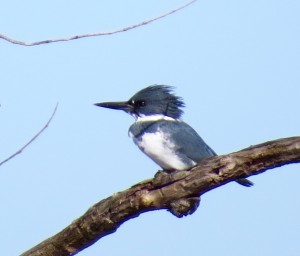 Belted Kingfisher, Megaceryle alcyon,  Male. Female has a brown breast band. Usually seen year-round. Hovers over water to locate small fish before diving headfirst.  Voice is a long uneven rattle along with a more musical rapid trill, tirrrrr. It is 13″ in length, a wingspan of 20″ and weighs 5 oz. 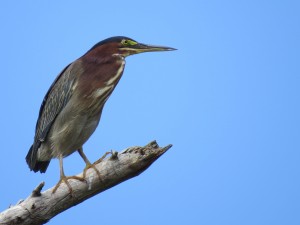 Green Heron, Butorides virescens. Common until late Fall when they migrate South.  They crouches in shadows waiting for fish to swim by.  They have been seen to dangle twigs and parts of leaves to attract the fish.  Voice is an explosive, sharp, swallowed SKEEW or skeow. It is 18″ in length, a wingspan of 26″ and weighs 7 oz. 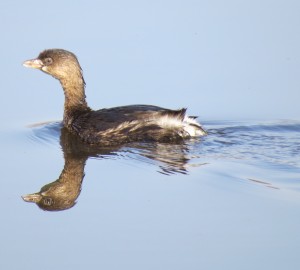 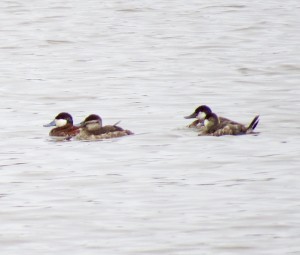 Ruddy Duck, Oxyura jamaicensis, Non-breeding male and females. Found in the late Fall and winter.  Feeds on plants, insect larvae, and mollusks.  Voice of female gives a low, nasal raanh and a high sharp squeak and falsetto queer. Male is essentially silent unless mating and has a muffled popping series jif jif jif jif ji ji ji ji ji jijijijijiwirrrrr. It is 15″ in length, a wingspan of 18.5″ and weighs 19.2 oz. 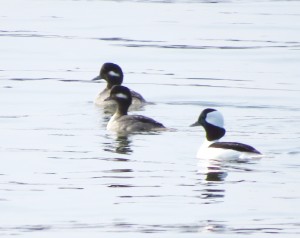 Bufflehead, Bucephala albeola, Male and 2 Females.  Usually arrives middle of November and stays through the winter.  Dives for mollusks, crustaceans and insect larva.  Usually is silent.  Female voice gives a low, hollow prrk prrk. Male produces a squealing or growling call.  It is 13.5″ in length, a wingspan of 21″ and weighs 13 oz. 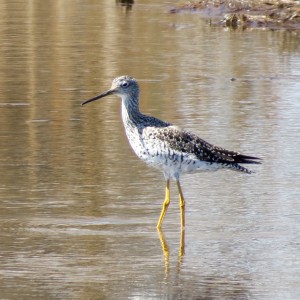 Greater Yellowlegs, Tringa melanoleuca, Non-breeding adult.  Migrates in around middle of Fall and remains through winter.  Forages by gracefully walking and picking up invertebrates to actively chasing fish in shallow waters.  Voice in flight is a loud ringing deew deew deew. It is 14″ in length, a wingspan of 28″ and weighs 6 oz. 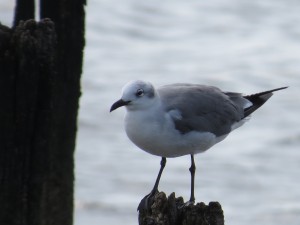 Laughing Gull, Leucophaeus atricilla, Non-breeding adult.  Found year round.  Quite a taker of handouts. Voice is a nasal laughing in a two syllable kiwi or kahwi.  It is 16.5″ in length with a wingspan of 40″ (3 ft 4″) and weighs 11 oz.