Birds identified in Owl Alley in the Spring (March through May)

You are here: Home1 / Birds identified in Owl Alley in the Spring (March through May)

There are a number of different species of birds identified in Owl Alley in the Spring (March through May).  Here are a few that are frequently identified.

Brown-headed Nuthatch, Sitta pusilla, can be found on pine trees, eating pine seeds.  Its song is a high, sharp, nasal KEWde, followed by a harsher KEWdodododo teew, better described as sounding like a squeaky toy or rubber ducky.  It is 4.5″ in length, a wingspan of 7.75″ and weighs 0.35 oz.

Northern Flicker, Yellow-Shafted (Tiaga/Eastern), Colaptes auratus, unlike other woodpeckers forages largely on the ground feeding on ants.  Its contact call is a high, piercing keew; when flushed a soft, muffled bwirr. Its song is a long, strong kwikwikwikwi, continued steadily for up to 15 seconds.  It is 12.5″ in length, a wingspan of 20″ and weighs 4.6 oz.

Downy Woodpecker, male, Picoides pubescens, can be seen year-round.  It often forages on twigs and weed stems.  Its calls are a short, flat pik and a slow rattle call beginning slow and squeaky, ending lower and faster from kikikikikikiki to twi twi twi; its drum is a simple rapid cool.  It eats mainly insects, including beetle larvas that live inside wood or tree bark.  It is 6.75″ in length, a wingspan of 12″ and weighs 0.95 oz.

Brown Thrasher, Toxostoma rufum, usually hides in dense brush.  It forages on the ground for insects and other invertebrates.  Its song is of rich, musical phrases, each repeated two or three times with a pause with each set, whichoo-which. It is 11.5″ in length, a wingspan of 13″ and weighs 2.4 oz. 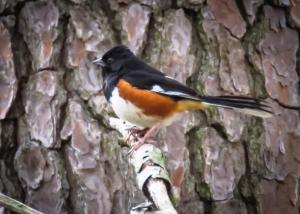 Eastern Tohee, Pipilo erythrophthalmus, is common in brushy habitats and shrublands or bushy undergrowth within open forests. It forages on the ground for seeds and insects. It’s sog typically is one to three short, husky notes followed by a slow, musical trill jink denk te-e-e-e-e-e-e (drink your teeeee). It is 8.5” in length, a wingspan of 10.5” and weighs 1.4 oz.