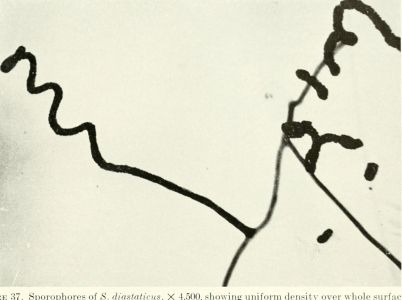 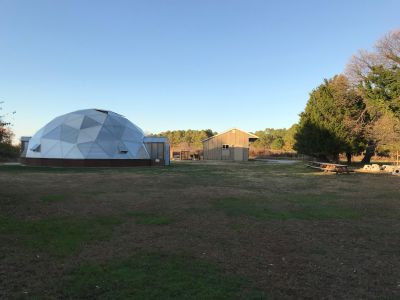 The term “actinomycete” is a non-taxonomic term that’s used to describe a large group of bacteria with similar characteristics that are generally members of the order Actinomycetales.  Members of the group have similar cell walls, and tend to form threadlike strands that grow as mycelia, often with aerial hyphae. These characteristics are similar to those of fungi, but actinomycetes are prokaryotic (fungi are eukaryotic) and are generally much smaller than fungi.  Actinomycetes are just one group of the bacterial biomass in the soil.  Estimates are that a teaspoon of productive soil typically contains between 1 million and 1 billion bacteria. [1]

Soil bacteria are essential to the nutrient cycle, which ensures that various minerals and nutrients are recycled and made available for living organisms. The actinomycetes contribute to this cycle by decomposing certain biologically produced materials (e.g. chitin and cellulose) that are hard for other soil microorganisms to catabolize.  Actinomycetes typically perform this decomposition activity in soils with a high (basic) pH. Fungi perform a similar function, typically in soil with a low (acidic) pH.

If you’re visiting this station on a spring or autumn day, or following a rain storm, you may notice the characteristic aroma of “turned earth”. Actinomycetes are principally responsible for that smell.  That “earth scent” has been termed “petrichor” and is associated with the release of a chemical called geosmin from soil actinomycetes.  Human noses are exquisitely sensitive to geosmin and are able to detect it at concentrations as low as 5 parts per trillion. [2] Scientists have investigated the role of geosmin in human evolution. [3]

Actinomycetes are also important as the source of life-saving antibiotics.  The first drug active against the bacterium that causes tuberculosis (Mycobacterium tuberculosis) was purified from the actinomycete Streptomyces griseus by the soil microbiologist Selman Waksman (a discovery which earned him the 1952 Nobel Prize in Medicine).  Actinomycetes are the source of many other antibiotics, and may represent a source of future therapies against drug-resistant pathogens.

Aroma Chemistry: The Aroma of Rain

The White Plague in the City of Angels – Scientific Discovery of Streptomycin, 1946

Antimicrobials from Actinomycetes – Back to the Future