Birds identified in Owl Alley in the Winter (December through February)

You are here: Home1 / Birds identified in Owl Alley in the Winter (December through February...

There are a number of different species of birds identified in Owl Alley during the Winter (December through February). Here are a few that are frequently seen. 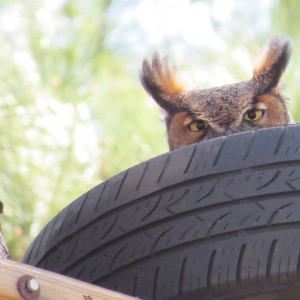 Great Horned Owl, Bubo virginianus, in the tire nest.  It is nocturnal, but roosts during the day in trees.  At night it forages for medium sized mammals, such as rabbits and skunks.  Its song is a deep, muffled hooting in a rhythmic series hoo hoodoo hoooo hoo or longer ho hoo hoo hoododo hooooo ho. It is 22″ in length, a wing span of 44″ and weighs 49.6 oz. 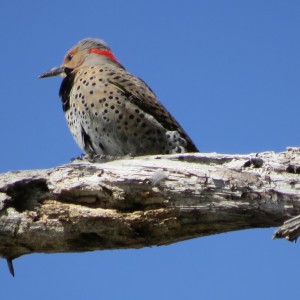 Northern Flicker, Yellow-Shafted (Taiga/Eastern), Colaptes auratus, unlike other woodpeckers forages largely on the ground feeding on ants.  Its contact call is a high, piercing keew; when flushed a soft, muffled bwirr. Its song is a long, strong kwikwikwikwi, continued steadily for up to 15 seconds.  It is 12.5″ in length, a wing span of 20″ and weighs 4.6 oz.

Dark-eyed Junco, Slate-colored Variant, Junco hyemalis, can be seen year-round, though more frequently in the Fall and Winter.  Juncos eat insects including beetles, caterpillars, ants, wasps, and flies.  It also likes seeds in the Winter.  Its call is a very high, smacking stip and has very warbling phrases in Spring.  Its flight call is a sharp, buzzy tzeet.  It is 6.25″ in length, with a 9.25″ wing span and weighs 0.67 oz. 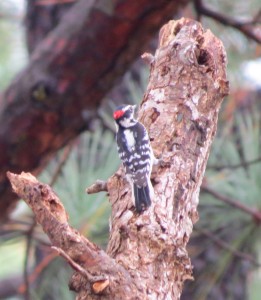 Downy Woodpecker, male, Picoides pubescens, can be seen year-round.  It often forages on twigs and weed stems.  Its calls are a short, flat pik and a slow rattle call beginning slow and squeaky, ending lower and faster from kikikikikiki to twi twi twi; its drum is a simple rapid roll.  It eats mainly insects, including beetle larvae that live inside wood or tree bark.  It is 6.75″ in length, a wing span of 12″ and weighs 0.95 oz. 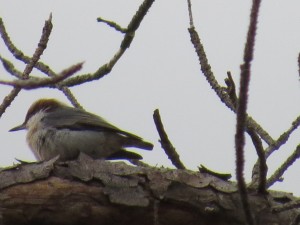 Brown-headed Nuthatch, Sitta pusilla, can be seen on pine trees, eating pine seeds.  Its song is a high, sharp, nasal KEWde, followed by a harsher KEWdodododo teew, better described as a squeaky toy or rubber ducky.  It is 4.5″ in length, a wing span of 7.75″ and weighs 0.35 oz.