You are here: Home1 / Birds identified on Marshy Creek Trail in the Spring (March through Ma...

Over 200 species of birds can be seen along Marshy Creek Trail in the Spring (March through May).  Here are a few birds that are frequently identified that you may see.

Blue Jay, Cyanocitta cristata, is commonly seen year-round at CBEC.  It feeds on a variety of insects, as well as acorns and other seeds.  Its call is a shrill, harsh descending scream jaaay or a short, harsh shkrr when attacking a predator. It is 11″ in length, a wingspan of 16″ and weighs 3 oz. 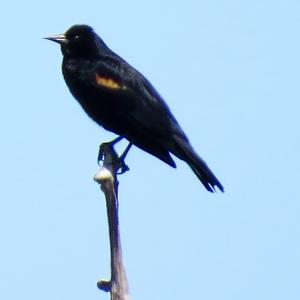 Red-winged Blackbird, male, Agelaius phoeniceus, is seen year-round.  It forages for seeds and invertebrates in open fields.  Its song is several introductory notes followed by a harsh, gurgling trill kon-ka-reeeee.  It is 8.75″ in length, a wingspan of 13″ and weighs 1.8 oz.

White-throated Sparrow, Zonotrichia albicollis, is seen throughout the winter and stays into the summer until it migrates North. It eats terrestrial insects in the summer and small fruits and seeds the rest of the year.  Its song is a high, pure whistle sooo seeeee dididi dididi dididi (Old Sam Peabody Peabody Peabody). It is 6.75″ in length, a wingspan of 9″ and weighs 0.91 oz. 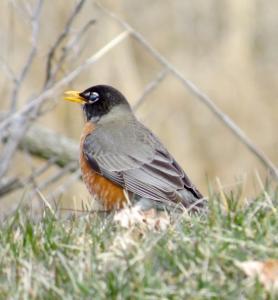 American Robin, Turdus migratorious, is seen year-round at CBEC. It is seen on lawns and fields searching for earthworms and mainly berries for its winter diet.  It song is a series of low, whistled phrases delivered rather quickly but with long pauses between.  Often two or three phrases are repeated alternatively plurrri kliwi plurrri kliwi… It is 10″ in length, a wingspan of 17″ and weighs 2.7 oz.